"I wouldn't let you sleep in my room if you were growing on my ass!"

Buzz McCallister was the oldest son and child of Peter and Kate McCallister.

As an adult, Buzz became a police officer.

While the family packed for their trip to Paris, Buzz's cousin Rod asked who would feed Buzz's tarantula while they were away, to which Buzz replied that it ate "a whole load of mice guts", which would hold it over. Buzz then asked Rod if it was true that French girls did not shave under their arms and Rod answered, "Some don't." He then asked Rod if France had nude beaches, only to be told "not in the winter." Buzz's brother Kevin then entered, much to Buzz's annoyance, as he did not knock.

After rudely refusing Kevin's request to sleep in his room (as Kevin did not want to sleep in the hide-a-bed with Fuller), Buzz told him and Rod about their neighbor Old Man Marley, who he said was rumored to be the "South Bend Shovel Slayer," who murdered his family (in addition to half the people on the block) where he used the salt in his bucket to mummify his victims.

During dinner, Buzz decided to dig in and take upon a whole cheese pizza that he and Kevin were actually supposed to share and he ridiculed to Kevin. After finding this out, Kevin tackled him towards the kitchen island, causing milk to spill towards the entire family's airline tickets. As a result, Kevin was sent to the third floor for the night by their mother, Kate.

In Paris, after it was discovered that Kevin had been left behind; when the family was at Uncle Rob's apartment, Megan asked if Buzz was worried about Kevin being home alone, and Buzz replied, "No, for three reasons. A. I'm not that lucky, 2. We have smoke detectors, and D. We live in the most boring street in the United States of America, where nothing even remotely dangerous will ever happen to him, period."

Upon his return home, Buzz remarked to Kevin that he thought it was pretty cool that Kevin did not burn the place down and was surprised alongside the rest of the family that Kevin went shopping. When the family split up to go to other rooms in the house, Buzz went to his own. Finding it in a mess, Buzz yelled, "Kevin, what did you do to my room?!"[1]

The following year, at a Christmas pageant he and his siblings were in, Buzz seized the opportunity for a prank on Kevin. As Kevin was about to begin his solo, Buzz waited for the right moment to hold electric candles behind Kevin's ears, making them glow. Everyone in the audience burst into laughter, except for the piano player, the conductor, Kate, Peter, Aunt Leslie and a man sitting in the front row. Kevin punched Buzz, making him fall, causing a chain reaction that ruins the pageant.

That night, Buzz apologized to Kevin and the rest of the family, and they clapped for him. However, he then grinned to Kevin, saying, "Beat that, you little trout sniffer!", showing that he probably didn't mean anything he said. Kevin left the room angry with the family for believing Buzz and not him. Buzz then commented, "What a troubled young man."

Later, in Miami — after Kevin was separated from the family again — Kate received a call from the police, informing her that Kevin was in New York, and Buzz got ready to pack up and go there, along with the rest of the family.

On Christmas morning, a truckload of gifts came to the Plaza Hotel as a reward for Kevin foiling Harry and Marv's attempt to rob Duncan's Toy Chest. Buzz realized that had it not been for Kevin getting on the wrong flight, they would not be in the suite with the Christmas tree and the gifts in the first place, and he told the rest of the family this. Much to Kevin's gladness, Buzz decided to let Kevin open the first present as they reconciled. By doing that, he tossed him a gift, only letting him catch it. Buzz was forgiven by Kevin for ruining his solo during the Christmas pageant, and they wished each other a Merry Christmas.

When Buzz received the bill for Kevin's original stay at the Plaza Hotel, he gave the bellman Cedric a wad of chewing gum as a tip. He then looked over the bill and smiles upon seeing the total $967 on the last page before remarking "Merry Christmas, indeed" and finally giving the bill to Peter, who then yelled, "Kevin! You spent $967 on room service?!"[2]

Buzz grew up and began working as a police officer. His position gave Kevin an opportunity to irresponsibly prank his brother every festive season by phoning the police and putting in a bogus claim that a child is home alone, as a way for getting revenge for being left home alone twice three decades earlier. 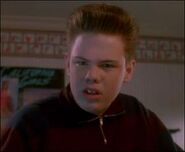 Buzz listening to Kevin in the first film