Home Alone Wiki
Register
Don't have an account?
Sign In
Advertisement
in: Characters, Characters with mugshots, Terrorist group,
and 2 more

Earl Unger is one of the four international spies and the quaternary antagonist of Home Alone 3.

He, along with Petr Beaupre , Burton Jernigan, and Alice Ribbons, is one of the four international spies who have stolen a valuable missile cloaking computer chip for a terrorist group.

Unger is tall, has a stubble, long hair, and dresses as an old man for his disguise during a small portion of the movie. During the final battle, he wears a gray-and-white camouflage suit. He gets electrocuted, a trunk of books and a set of weights fall onto his head along with Petr, then he gets hit by Plaster of Paris, then hit in the head by a window, then gets his feet caught in two pullable Mega Bloks canisters filled with glue, then gets his fingers stuck in a mouse trap, accidentally shoots a sewage pipe (which forced him to change clothes) and, finally, crashes into a frozen swimming pool. He is later found by police (along with Jernigan) and arrested. He is shown to have contracted Alex Pruitt's chicken pox in his mugshot. 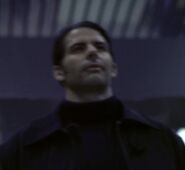