"You can mess with a lot of things, but you can't mess with kids on Christmas."[src]

Kevin McCallister was a young boy who was mistakenly separated from his family twice and forced to defend himself against bumbling burglars Marv and Harry. He was the youngest child of Peter and Kate McCallister and the youngest sibling of Buzz, Megan, Linnie, and Jeff.

Kevin McCallister lived with his older brothers and sisters in the McCallister house in Winnetka. Being the youngest sibling he would sometimes get tormented by the others. He had enough of being tormented and being in a house with so many people that he declared when he grew up and got married he would be living alone.

One night, after getting into a fight with his older brother, Buzz, who purposely stole and ate Kevin's cheese pizza, Kevin was sent to the third floor of the house to go straight to bed to sleep as punishment by their mom, Kate, and he wished that his family would disappear. The next morning, as the family prepared in haste to leave, Kevin was still sleeping. During a headcount, his cousin Heather mistook the McCallisters' neighbor's son and Kevin's friend Mitch Murphy, for Kevin. The family, in a rush, hurried off to the airport, unaware that Kevin was not with them.[1]

Later, Kevin woke up to find his whole family gone. Kevin was thrilled, thinking that his wish came true and that he made his family disappear. He watched Angels with Filthy Souls (a film that his uncle would not let him watch the night before) and ate a giant ice cream sundae. The film's shooting scene got him startled and he shouted for his mom.[1]

Harry and Marv, the "Wet Bandits", start robbing houses in Kevin's neighborhood and planned to rob Kevin's house, too, but he managed to scare them away multiple times. When they discovered that he was only a child and that he was alone, they planned to come back and rob his house at 9:00 p.m. on Christmas Eve.[1]

Before they came, Kevin went to see "Santa Claus". He told him that instead of presents, he wanted his family to come home. He later walked by a house and saw a happy family eating together. Kevin went to church and discovered that his neighbor, Mr. Marley, was not as scary as Kevin imagined. They spoke about their respective family issues and Kevin suggested Marley contact his estranged son.[1]

This conversation apparently encouraged Kevin to protect his house and face Harry and Marv, setting up booby traps for them. After they started chasing him, he called the police. Kevin used a makeshift zipline to get to his tree house and the burglars began chasing him again. He led them to the Murphy's house, which they had already robbed. They were a step ahead of him this time, and they caught him. Just in time, Old Man Marley intervened and saved him, and shortly later, Harry and Marv were arrested.[1]

He woke up on Christmas morning and checked downstairs, but his family were still not home. However, a few minutes later, his mother arrived and apologized to Kevin for the way she acted the night before the flight to Paris leaving him all alone in the house and not believing him that Buzz ate all his cheese pizza. As he forgave her, Kevin happily hugged his mom. A moment later, the rest of his family arrived as well. After greeting everyone (And keeping silent about his encounter with Harry and Marv), Kevin walked over to the window, looked out and smiled upon seeing that Marley had taken his advice and made up with his son, thus reuniting him with his family. Suddenly, Buzz shouted, "Kevin, what did you do to my room?!" and Kevin ran away from the window.[1]

One year later, the McCallisters were going to Florida for Christmas. Kevin saw Florida as contradictory to Christmas because he thought there were no Christmas trees in the state. While unplugging a charger for camcorder batteries, Kevin's father, Peter, accidentally unplugged the alarm clock, resetting the device to 12:00 upon replugging, wherein he did not even bother to notice and reset it.[2] During a school Christmas pageant, Buzz humiliated Kevin during his solo, causing Kevin to get furious and ruin the performance. Kevin refused to apologize for his actions and was annoyed with his family's decision to go to Florida, before going up to his third-floor bedroom of the house. After an argument with his mother about the vacation to Florida, Kevin wished to have his own vacation alone after Kate reminded Kevin about his wish to be home alone the previous year and told him that he would get it again this year.[2]

The next morning, in the confusion and rush to reach the airport on time, Kevin followed a man who had the exact same color coat as Peter and boarded a flight bound for New York City, while carrying Peter's bag containing his wallet, credit cards and a large amount of cash as Kevin realized that his family was in Florida and he was in New York.[2]

While in the state, Kevin toured the city and convinced the staff at the Plaza Hotel into giving him a room using Peter's credit card. During a visit to Central Park, he was frightened by the appearance of a homeless woman tending to pigeons.[2]

On Christmas Eve, Kevin once again toured the city in a limousine and visited a toy store where he met its philanthropic owner, Mr. Duncan. Kevin learned that the proceeds from the store's Christmas sales would be donated to the St. Anne's children's hospital. Duncan gave Kevin a pair of ceramic turtledoves as a gift, instructing him to give one to another person as a sign of eternal friendship. After encountering the Wet Bandits Harry and Marv (who recently escaped from prison and were now called the "Sticky Bandits"), Kevin retreated to the hotel. The hotel's concierge, Mr. Hector, confronted Kevin about the credit card which had been reported stolen. Kevin fled after evading Mr. Hector, but was captured by Harry and Marv. Harry took his ticket out of his hand and ripped it to shreds, so that way Kevin could not get back home or to Miami with his family. The duo discussed plans for robbing the toy store that night, before Kevin escaped, having recorded the entire conversation without the Sticky Bandits noticing.[2]

Following advice from the Pigeon Lady, who he then realized how her life had fallen apart and how she dealt with it by taking care of the pigeons in the park, Kevin vowed to her that he would be her friend. He went to his his uncle Rob and aunt Georgette's old townhouse, then undergoing renovations, and set up various traps in preparation for facing off once again against Hary and Marv.[2]

He then arrived at the toy store during Harry and Marv's robbery, threw a brick through the window (with a note explaining to Duncan what had happened), setting off the store's alarm, and led the pair to the townhouse, springing the traps. When the duo closed in on Kevin, he fled the townhouse and called 911. Harry and Marv were able to catch Kevin and attempted to kill him in Central Park. The pigeon lady intervened and incapacitated Harry and Marv by pelting them with birdseed, which attracted the birds and caused them to swarm the Sticky Bandits, and Kevin set off fireworks he had bought earlier to signal the police. Harry and Marv were re-arrested.[2]

At the World's Largest Christmas Tree, Kevin wished to see his family again and told her that he was sorry. Kate arrived just in time and she and Kevin reconciled as the two headed back to the hotel and Kate told Kevin that the family did not like the palm trees and having Christmas in Florida.[2]

On Christmas morning at the Plaza Hotel, Kevin and Buzz reconciled and Buzz allowed him to open up the first present. Kevin went to Central Park to give the pigeon lady the second turtledove. At the hotel, Buzz received the bill for Kevin's original stay. His father suddenly called out, "Kevin, you spent $967 on room service?!" at which point Kevin, knowing that he was in big trouble, ran away again, but this time back to the hotel.[2]

In the 2006 PS2 video game Home Alone, Kevin is one of four playable characters. He is represented as a boy with blond hair, blue eyes, and a red sweater (like his film counterpart) and must defend his house from burglars by locking the doors.

Kevin appears to be quite a mischievous, yet good hearted eight/nine year old. As he's the youngest child, he is often the victim of bullying from his older siblings, with his mom often unfairly chastising Kevin instead of Buzz. He is hot-tempered and often says cruel hurtful comments, particularly when he says he doesn't want to see his family. When he appears to have his wish granted, he is ecstatic and indulges in every whim. However, he deeply regrets his comments on the Christmas Eves he was abandoned, and does love his family, even his siblings.

He is very intelligent and cunning for his age. He is able to devise a whole array of booby traps in order to foil the Wet/Sticky Bandits. He is wise for his age, giving advice to Marley and the Pigeon Lady.

In Home Alone 2, we see Kevin no longer hot-tempered, but, however, Buzz completely humiliated him during his solo, which led Kevin furious because of his family believing Buzz's lies and annoyed about going to Florida, much of his disadvantages. 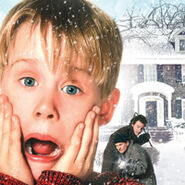 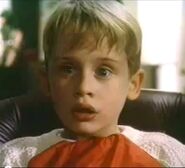 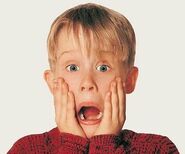 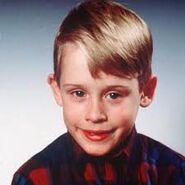 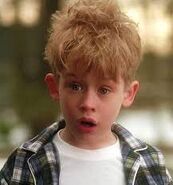