"I knew this was gonna be the best Christmas ever!"[src]

Kevin McCallister is the protagonist in Home Alone 4. He was portrayed by Mike Weinberg.

He has two older siblings Buzz and Megan.

Kevin scuppered the plans of two burglars named Marvin Murchins and Harry on at least more than one occasion.

Kevin's parents have separated and are filing for a divorce and his father is living with another woman named Natalie. After having enough of being bullied by Buzz, Kevin decides to spend Christmas with his father at Natalie's mansion. When left alone with the butler Mr. Prescott, Kevin is shocked to see Marv again, this time with his wife Vera in tow. Kevin is unable to contact Mr. Prescott in his living quarters so lures Marv and Vera to the bathroom and floods the house. Marv recognizes Kevin, but quickly makes an escape with Vera before Kevin's dad and Natalie return. They refuse to believe Kevin that the thieves had broken into the house, and Mr. Prescott denies anyone broke in. Then, Kevin, Peter, and Natalie trimmed the tree. The next day, Kate takes Kevin a few of his things. Later that night on Christmas Eve with the royals to arrive, Kevin sees Marv and Vera and Mr. Prescott moved him out of their way. Then, Kevin locks Mr. Prescott in the fridge and then drops sauce on Marv and Vera burning them both. The next day on Christmas with Peter and Natalie picking up the royals after their flight was cancelled the day before, Kevin tries to get rid of the suspected inside-man Mr. Prescott, Kevin finds out Molly is the inside man. Kevin makes Marv and Vera fall off the chandelier and makes Molly get stuck in the elevator. Mr. Prescott escaped the wine cellar using the dumbwaiter to knock out Molly who was about to knock out Kevin. In the end, Marv, Vera, and Molly go to jail, Peter breaks up with Natalie and lives with Kate, Kevin, Megan, and Buzz. The Royals spend their Christmas with the McCallister family. 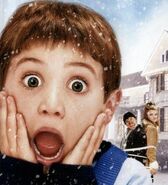 Retrieved from "https://homealone.fandom.com/wiki/Kevin_McCallister/Home_Alone_4?oldid=28634"
Community content is available under CC-BY-SA unless otherwise noted.