"You're what the French call les incompétents."

Linnie McCallister was the third child and younger daughter of Peter and Kate McCallister.

While getting ready to go on her family's Christmas vacation to Paris, she told her brother, Jeff, that she hoped that he did not pack any junk. She then turned to her younger brother, Kevin, and said that he knew their mother would pack his suitcase anyway, before adding that he was what the French called "les incompeténts" also informed him that he had to sleep on the hide-a-bed with their cousin, Fuller, and that if he had anything to drink, he would wet the bed.

Linnie later ate pizza, and got mad along with the rest of the family when Kevin accidentally got into a fight with Buzz over it.

The next day, she, along with the rest of the family, rushed to the airport after they overslept and almost missed their flight, making it just in time. When they reached Paris, they realized that they left Kevin home alone and rushed to the telephones, trying to call for help. Linnie and her siblings tried to call all of their friends, to no avail.

Linnie then went to her Uncle Rob's apartment with the rest of the family while her mother stayed at the airport, trying to get a flight back home.

Along with her father and siblings, Linnie managed to get a flight home, arriving on Christmas Day. When they arrived home, she advised Buzz and Megan to stop fighting. She was also glad to see that Kevin was all right, and was simultaneously surprised and happy to hear that he went shopping the previous day to get groceries the family needed, such as milk.

The next year, Linnie packed for her family's trip to Florida and sat down at a family meeting after Buzz and Kevin got into a fight during a Christmas pageant.

Running late for their flight again, she rushed to the airport with the rest of the family. Upon arrival, she helped pass out luggage at the Miami airport.

When the family went to the Villa De Dolphine, she looked at it in disgust.

She later watched a Spanish dub of It's a Wonderful Life in the family's hotel room and then rushed to New York City with the rest of the family when they learned that Kevin was there.

On Christmas morning, she opened presents from a truckload Kevin had earned from Mr. E.F. Duncan. 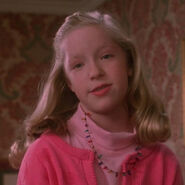