You may be looking for Molly Pruitt

Molly Murchins (a.k.a The Inside Man) was the mother of Marv Murchins and Natalie Kalban's maid. She was a supporting protagonist for most of the movie, but then turned evil during the end.

Much of Molly's background is unknown, apart from her claiming that her son Marv was a "real handful" in his childhood. Marv would grow up to become a criminal and commit several burglaries with his partner-in-crime Harry Lyme over the years, although ended up being scuppered by a young boy named Kevin McCallister. Marv met another criminal named Vera and married her and broke off his friendship and partnership with Harry. Molly went into partnership with her son and Vera and they plotted to kidnap the Prince of the Royal Family, and Molly became employed by Natalie and began working as a maid at her house, where the Royal Family were due to visit. Ironically enough, Natalie was in a relationship with a divorced Peter McCallister, the father of Kevin.

Kevin arrived at Natalie's house a couple of days before Christmas Day, as he was invited by his father. Natalie called on Molly and asked her to get Kevin's room ready for him, which she did. The following morning, Molly makes Kevin breakfast and later heads out; telling the butler Mr. Prescott to go easy on him.

While Molly is out, Marv and Vera (who have been watching the mansion overnight) gain access to the property and begin scouting it out. Unknown to them, they have been spotted by Kevin who lures them into a bathroom and floods the place, causing the pair of them to be watched away downstairs and into the main lobby. Marv is shocked to spot Kevin, and after introducing Kevin and Vera to each other the pair of them make their exit. Natalie and Peter don't believe Kevin's story, and Mr. Prescott denies any burglars (as he was asleep during the incident).

Due to Mr. Prescott's shady nature, Kevin suspects him as the inside man to Marv and Vera, and even shares his concerns with Molly, although she puts it down to an "overactive imagination". During this discussion she mentions having a son herself, and how he was a handful at Kevin's age.

On Christmas Eve, the Royals are due to arrive, and Marv and Vera (disguised as waiters) begin to set up a trap in Kevin's room to kidnap the prince, although it doesn't go so well as Kevin again interrupts their plans. During this chaos, Natalie and Pete arrive back from the airport and inform Molly that the Royals trip has been delayed due to the weather, much to Molly's disappointment. Natalie and Pete use the opportunity to announce their engagement, but it is interrupted when Kevin storms into the room and knocks people over in an attempt to evade Marv and Vera, who make their escape.

On Christmas morning, Natalie and Peter head off to collect the Royals, leaving Kevin and Mr. Prescott alone. Kevin locks Mr. Prescott in the wine cellar, and warns Molly that the kidnappers are coming and that he has locked their accomplice in the basement. But Molly reveals to Kevin that she is the accomplice and not Mr. Prescott, much to his shock. Marv and Vera make their entrance, with Marv addressing Molly as his mother, a double shock to Kevin. Molly then takes Kevin away and locks him in the wine cellar with Mr. Prescott.

Kevin attempts to contact his mother Kate to alert her to the situation, but the battery on Mr. Prescott's phone dies. Kate phones up the house and Molly answers it, and lies that Kevin is away with his father. Molly hangs up seemingly convinced, although has second thoughts on the situation. Molly informs Marv and Vera that Kevin tried to alert him mother, and when Marv asks Molly if he should show Kevin "who is boss" Molly orders him to sit down, as she is the boss and not him. Marv quietens down and does as he is told, confirming to Vera that he isn't in charge after all.

Kevin manages to escape the wine cellar by riding the dumbwaiter and begins using traps he set up earlier that morning to take down the trio. Molly ends up trapped in a lift, leaving it to Marv and Vera to try and stop Kevin, although they fail and end up being knocked unconscious. As Kevin stands over the pair of them feeling victory, Molly sneaks up behind Kevin and attempts to hit him over the head and hurt him, but is stopped by Mr. Prescott who knocks her unconscious.

Molly is taken into custody by the police along with her son and daughter-in-law.

Molly reveals to Kevin that she is the accomplice. 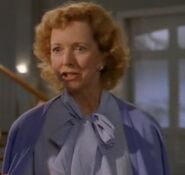